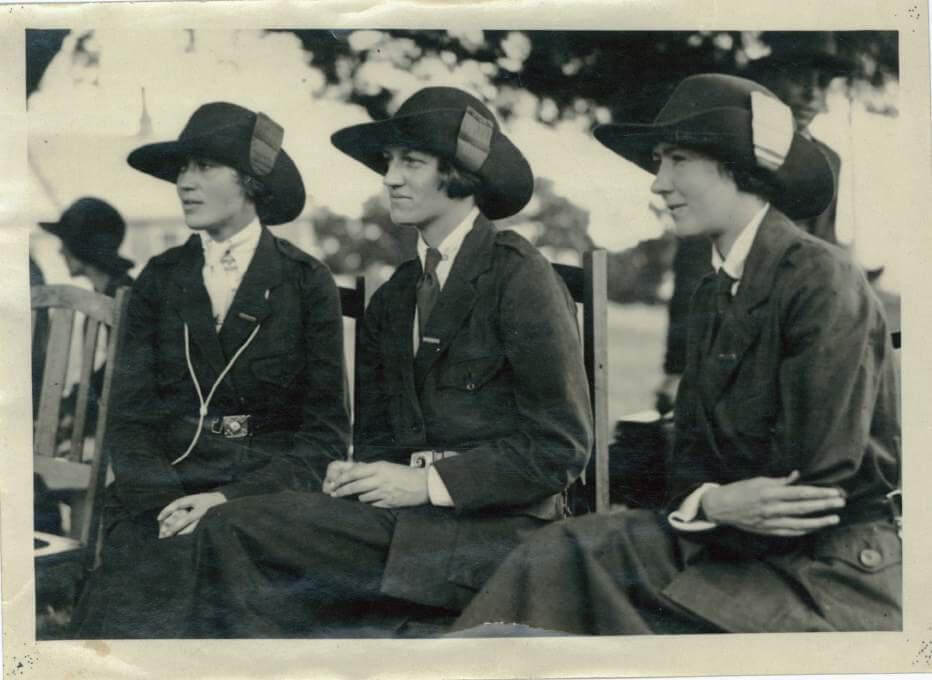 The Oldest Girl Guide in Australia

Ellice will turn 100 on January 19, 2019, making her quite possibly the oldest Guide in Australia.

To celebrate the hundredth birthday of this wonderful lifelong Guide, we’d like to tell you a bit about Ellice and share her wisdom with you, in her own words. How did you first get involved in Girl Guides?

I grew up in the East End of London, and times were very different then. I used to go to the local Sunday school, and there was a Guide Unit attached to it; they used to meet in the Sunday school hall, so I decided to join.  I remember that we couldn’t afford to buy our uniforms all in one go; we would save up and buy a bit at a time and made sure we took good care of it.

After a few years, when I was about 14, I transferred to another Unit and it was there I met my life-long friend Lily, who died earlier this year; we were in contact through all of our lives.

I was a Patrol Leader. I graduated to the Rangers, and during World War II our Unit became a Sea Guides Unit. Our town of Bethnal Green had adopted a war ship to support, so we became Sea Guides to support our town. In the thick of the Blitz, it was very risky to go to meetings, but we went as often as we could. Altogether I was in the Guides for about 10 years.

As we all had our First Aid and Nursing badges, we volunteered to be First Aid officers in the bomb shelters, and took shifts there to make sure help was always available if anyone was injured. Our Company also joined with the community to collect metal (pots and pans, tin, tools) to assist in the war effort. Ellice (on the right, age 14) with her father and sister.

How many years did you volunteer with Girl Guides?

It’s hard to remember exactly as it was so long ago, and a lot has happened since. But it was about 12 years, maybe a bit more.  My girls were in the local 1st Altona Girl Guides when one of the Leaders left ; the remaining Leader was struggling on her own, so I said I would help out for a year, or until she found some-one else. Well, after a year she left and I stayed on as Captain; I had a few Lieutenants over the years assisting me with the Company and the group was very popular; we even had a waiting list to join.

Ellice with the tray she received 1973 from the Local Association of Guides for 10 years of service.

What are your favourite memories of Girl Guides?

Going on our annual camp for a week was the highlight for me; we saved all year to get the money to go to camp.

We would catch the train to the countryside, and camp out on a farmer’s land. We put up our bell tents; the farmer dug a trench for our toilet, and we erected shelters over it and kept it all clean and tidy. We cooked over camp fires, making our own structures to hang our pots and pans over the fire to cook our dinner and make cups of tea. Coming from the East End, being in the countryside was a real eye-opener. Observing the farmer at work and seeing all the animals was fascinating to us city dwellers.

My other great memory was being the Captain when three of my Company became Queen’s Guides, one being my own daughter Marion. We went to Government House for the presentation in the grand ball-room, it was a very special moment for myself and the Company. There was also a special ceremony at the Local Council where the girls were honoured for their achievement. The girls were tested for their First Aid badges by the Matron of the local hospital; she was impressed by the high standard expected, and said that the elements were as tough as those in the first year of nursing.

How did volunteering with Girl Guides benefit you?

Lifelong friendships and connecting with the local community were some of the benefits that I got from Guiding. But one of the most important achievements for me was in seeing some girls who had learning difficulties, or trouble making friends, joining our Company, being taken under our wing, and gradually becoming less socially isolated. The benefits from Guiding flowed into their schooling and they blossomed into confident young women. Ellice at Government House in 1970. She was attending a Queen’s Guide Award ceremony for girls in her Unit, including her daughter Marion.

What advice would you give to the Leaders of today?

Look out for the outsider; try to find out their interests and use the Unit to support that girl to reach her potential and feel included.

What advice would you give to the Girl Guides of today?

Give it a go, nothing is impossible, help others and be a friend, keep going and see it through. Try to give back to the Unit so others can also benefit as you have.

Thank you to Ellice and her daughter Marion for sharing this wonderful story with the wider Guiding community.